Chilean alpacas were first imported to the United States in 1984.  Their colors varied, including blacks, grays, browns, fawns, pintos, whites and more.

Peru didn’t allow the exportation of their alpacas until 1991, with the first Peruvian alpacas arriving in the U.S. in 1993. They were primarily white, with a few fawns, as many Peruvians had been selectively breeding alpacas for the white color preferred by the larger fiber mills. They continued to be imported as well as bred here in the U.S.A. until the registry was closed to new imports in 1995, that is why only alpacas that are born to registered parents can themselves be registered in the U.S. Alpacas are being successfully raised and enjoyed throughout North America and abroad.

There were a total of 7 importations of alpacas from Peru before imports were closed.  The importers used the following method to identify alpacas brought in during each of the imports.

Peruvian, Bolivian and Chilean refer to the country of origin of an alpaca.  In competitions this information is not a factor -- alpacas are judged and ranked on the correctness of their conformation and the quality of their fiber.

An Alpaca  is a domesticated species of South American Camelid. They are considerably smaller than llamas, and are bred specifically for their fiber. There are two types of alpacas, based on the style of fleece that their fiber forms, the Huacaya and the Suri.  Alpaca fiber is used for making knitted and woven items, similar to wool. These items include blankets, sweaters, hats, gloves, scarves, socks, and a wide variety of textiles.

Alpacas have been domesticated for thousands of years. The Moche people of northern Peru often used alpaca images in their art. There are no known wild alpacas, though its closest living relative, the vicuna (also native to South America), are believed to be the wild ancestor of the alpaca. The alpaca is larger than the vicuna, but smaller than the other camelid species.

Alpacas are social herd animals that live in family groups consisting of a territorial alpha male, females and their young. Alpacas warn the herd about intruders by making sharp, noisy inhalations that sound like a high pitched bray. The herd may attack smaller predators with their front feet, and can spit and kick.
Not all alpacas spit, but all are capable of doing so.  Spitting is mostly reserved for other alpacas, but an alpaca will occasionally spit at a human.

Alpacas use a communal dung pile, where they do not graze. This behaviour tends to limit the spread of internal parasites. Generally, males have much tidier, and fewer dung piles than females who tend to stand in a line and all go at once. One female approaches the dung pile and begins, and the rest of the herd often follows.

Alpacas make a variety of sounds. When they are in danger, they make a high-pitched, shrieking whine. Some breeds are known to make a "wark" noise when excited. Strange dogs—and even cats—can trigger this reaction. To signal friendly or submissive behavior, alpacas "cluck," or "click" a sound possibly generated by suction on the soft palate, or possibly in the nasal cavity. Individuals vary, but most alpacas generally make a humming sound. Hums are often comfort noises, letting the other alpacas know they are present and content. The humming can take on many inflections and meanings. When males fight they scream a warbling bird-like cry, presumably intended to terrify the opponent.

Females are "induced ovulators"; the act of mating and the presence of semen causes them to ovulate. Females usually conceive after just one breeding, but occasionally do have troubles conceiving. Artificial insemination is technically difficult, but it can be accomplished. Alpacas conceived from artificial insemination are not registrable with the Alpaca Registry.  A male is usually ready to mate for the first time between one and three years of age. A female alpaca may fully mature (physically and mentally) between 12−24 months. It is not advisable to allow a young female to be bred until she is mature, as over-breeding a young female, before conception is possible, is a common cause of uterine infections. As the age of maturation varies greatly between individuals, it is usually recommended that novice breeders wait until females are 18 months of age or older before initiating breeding. The gestation period is 345 ± 15 days, and usually results in a single offspring, or cria.   Twins are rare, occurring about once per 1000 deliveries. After a female gives birth, she is generally receptive to breeding again after about two weeks. Crias may be weaned through human intervention at about 6 months and 60 pounds, but many breeders prefer to allow the female to decide when to wean her offspring. Offspring can be weaned earlier or later depending on their size and emotional maturity.

Alpacas generally live for up to 20 years.

Alpacas need to eat 1-2% of body weight per day, so about two 60 lb bales of grass hay per month per animal. When formulating a proper diet for alpacas, water and hay analysis should be performed to determine the proper vitamin and mineral supplementation program. Two options are to provide free choice salt/mineral powder, or feed a specially formulated ration. Indigenous to the highest regions of the Andes, this harsh environment has created an extremely hardy animal, so only minimal housing and predatory fencing are needed. The alpaca’s three-chambered stomachs allow for extremely efficient digestion. There are no viable seeds in the manure, because alpacas prefer to only eat tender plant leaves, and will not consume thick plant stems; therefore, alpaca manure does not need composting to enrich pastures or ornamental landscaping. It is recommended that 2nd and 3rd cutting hays only be used when feeding your alpacas. Nail and teeth trimming is needed every 6–12 months, along with annual shearing. Similar to ruminants, such as cattle and sheep, alpacas have only lower teeth at the front of their mouths; therefore, they do not pull grass up by the roots. Rotating pastures is still important, though, as alpacas have a tendency to re graze an area repeatedly. Alpacas are fiber-producing animals; they do not need to be slaughtered to reap their product, and their fiber is a renewable resource that grows yearly.

Our Online Marketplace for Fiber Products and More 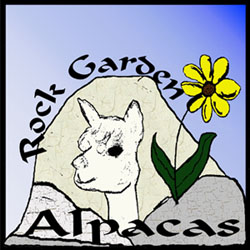 We hope you get a chance to visit our Rock Garden Alpacas website where we have information on all of our alpacas. 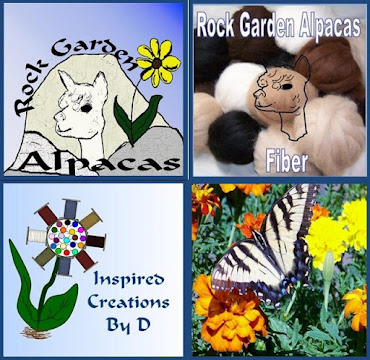